How Toilets Help Keep Us Healthy 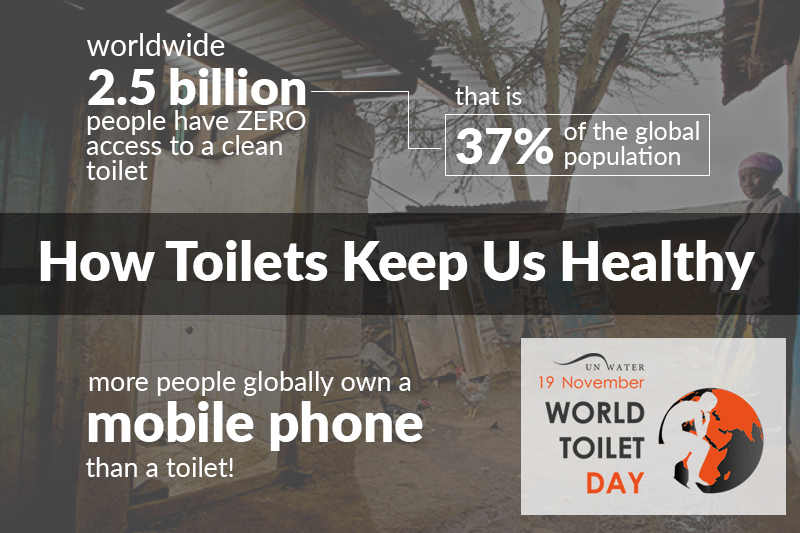 How Toilets Help Keep Us Healthy

The humble toilet. Something that most of us use on average six times a day, but which we don't spend any time thinking about. It's just one of those essential household items which we take for granted and only really notice when it goes wrong. However it wasn't that long ago that flushing toilets and sewers to take all the waste away were unheard of in the UK, and in lots of parts of the world still are unheard of. Nobody would want to go back to the days of open sewers and no proper sanitation, but what are the risks associated with lack of toilet facilities?

Cholera was the illness which really prompted the authorities in London to do something about the sewerage system. London's population ballooned in the Victorian times and by the 1850s there were repeated cholera epidemics. Scientists started to make the links between unclean water and illness, and the problem came to a head in the summer of 1858 when the hot weather led to “The Great Stink” in the city. Cholera is highly infectious; one person suffering from diarrhoea associated with the disease can infect many others if human waste cannot be disposed of properly. Cholera is easy to prevent, though, and there hasn't been an outbreak in the developed world since 1911. In the developing world though cholera is still a problem, and if you're planning on visiting areas with poor sanitation, take precautions.

The other main condition which is spread by poor sanitation is typhoid. This is another very contagious infection which is spread by eating or drinking something which has been touched by someone with the infection who hasn't washed their hands properly after using the toilet. Typhoid causes fever, a rash and confusion, and symptoms can last for a month. Treatment is becoming harder for typhoid due to increased resistance to antibiotics. There are over 27 million annual cases of typhoid and this is a very real danger for people travelling to areas with poor sanitation, which is why most travellers to areas such as the Caribbean or Africa are recommended to be vaccinated.

We've all had an upset tummy from time to time and while it's not pleasant, it's rarely life-threatening. Diarrhoea is caused by a whole range of different bacteria which we swallow, either on our food or because we haven't washed our hands properly. Hand washing after using the toilet is key in preventing spreading the bacteria around, and here in the UK, that's easy. In other countries though where there is no clean water, it can be almost impossible to get rid of the bacteria which cause diarrhoea and in the elderly or young children, this can lead to dehydration which can be fatal.

There is a whole host of other problems which can be caused by coming into contact with raw sewage, and although they aren't generally a problem here, they are worth bearing in mind when overseas. Hepatitis A, Tetanus and Leptospirosis can all be caught from coming into contact with raw sewage. Hand washing is key in avoiding all of these nasty bugs while travelling overseas, and should also be standard practice while at home.

So what can I do to minimise my risk of all of this?

First, it's important to state that typhoid and cholera and the other nasties aren't an issue here in the UK and will only be something to think about if you're travelling to the developing world and off the beaten track. Don't lose sleep over it. However, less acute problems such as flu or norovirus are problems at home and can be easily spread by people not washing their hands properly after using the loo and then shaking hands with others or touching door handles or other items. Effective hand washing is, therefore, your first line of defence - and we mean proper hand washing with warm water and soap, between the fingers and all over the hands, not just waving your palms under the cold tap and hoping for the best. Antibacterial gels are a reasonable alternative in situations where you can't get warm water and soap but are no substitute for proper washing of hands.

This week, of course, is World Toilet Day, which is an annual campaign to raise awareness and draw attention to sanitation issues around the world.

Background image courtesy of Huffington Post that has been edited by ourselves.