The History of Flushing Toilets 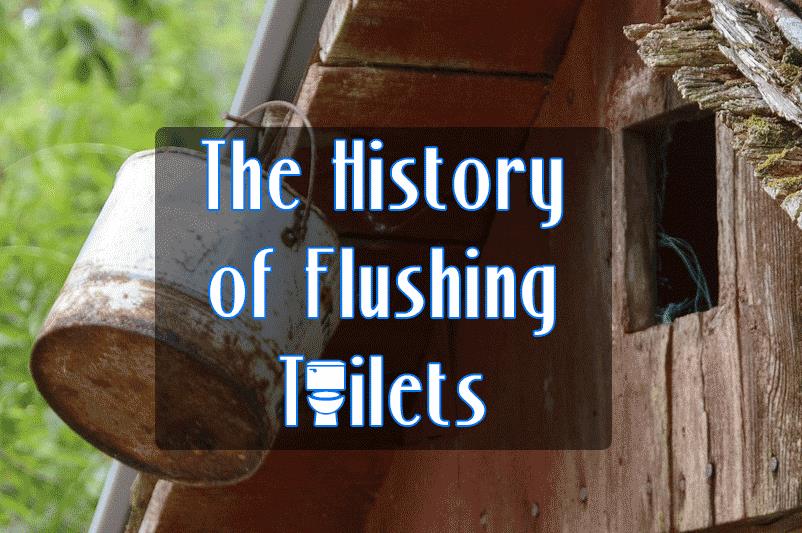 The History of Flushing Toilets

In the days before the flush, early toilets were remarkably simple things. For most, a hole in the ground was the best they could hope for, ideally not too near to somebody's home. Some of the earliest surviving examples of more modern toilets date back to circa 2800BC and featured a chute that directed the waste into a pit or drainage system. The Romans were one of the first civilizations to innovate something resembling a flush system; waste would be left in a trough beneath toilets and then occasionally washed away by a water flow. These early examples illustrate that waste removal has always been a significant concern and one that countless inventors have attempted to address. Over the centuries, it was decided that redirecting a river to flow beneath your toilet was no longer a practical idea and so circumstances dictated that the search should begin for a system that would efficiently and effectively remove waste from the toilet.

In the 1700s and 1800s, the Industrial Revolution led to a population surge in Britain's cities, particularly London, and the grim realities of such an increase became ever more apparent. London's population had more than doubled in mere decades, creating a dilemma regarding the staggering growth in human bodily waste and how best to deal with it. London had historically relied on cesspits, which frequently overflowed and had the additional problem of producing methane gas, which could explode if it came into contact with fire (a major issue in a city that still depended on candles and lanterns for light). As an early countermeasure, local authorities decided to redirect sewage into gullies, which had been designed to drain rainwater and prevent flooding. Unfortunately, these gullies led straight into the River Thames, quickly converting the waterway into a giant open sewer.

As generally unpleasant as the Thames was to smell and look at, there were more disastrous consequences. Cholera was the deadliest result, spreading throughout the city's population as the Thames became progressively filthier. One particularly devastating outbreak killed as many as 14,000 residents of London, one in every hundred people living in the city. It was difficult for politicians to ignore the sights and smells of this period, given the proximity of Westminster to the Thames. An especially hot summer in 1858 only exacerbated the problem, with the heatwave becoming known as “The Great Stink” and plans to create a closed, modern sewage system in London were quickly approved by those in power, though they were hesitant to provide funding.

Even as London began implementing its new sewer system, which would transport sewage away from the city without polluting the river, there were other issues that needed addressing. Previous attempts had been made to create something resembling modern flushing toilets, with waste being carried away down pipes and into sewers. Each of these attempts fell at the same unfortunate hurdle: even as waste was removed, odours from the sewer below would find their way up the pipes and into people's homes. Making the pipe airtight while still allowing waste to be flushed away was a challenge that perplexed inventors and the search for a solution was a long and difficult one.

By placing a bend in the pipe, gravity would cause water to rest at the lowest point in the middle of the pipe. This water makes the pipe airtight, preventing unpleasant smells rising from the sewer, and also helps remove waste from the toilet. When the toilet is flushed, the water occupying the S-bend is washed away and replaced with water held in the cistern. The S-bend increased the hygiene and cleanliness of toilets exponentially.

While Londoners enjoyed their glimpse at the future of plumbing, free of the disgusting sights and smells that had become commonplace in their city, there was one negative. The population had not known that there was a better alternative to their odious lifestyle and now they implored the authorities to construct covered sewers and flushing toilets throughout the city. During the Great Stink of 1858, the curtains in Westminster were soaked in chloride of lime in a futile attempt to shield those inside from the terrible odour. Politicians decided to act and took just eighteen days to pass legislation authorising an overhaul of London's sewers. Joseph Bazalgette, who had designed London's proposed new sewer systems, was inevitably given the money to begin his project.

It was a gradual process but a vital one; Bazalgette's sewers took ten years to complete and required digging up 2.5 million cubic metres of ground. London's sewer system became one of the best in the world and the spread of the flushing toilet (and its signature S-bend) meant that Britain transformed plumbing around the world.

Alexander Cumming's S-bend may have been replaced by the U-bend but the theory behind the design remains the same and his legacy is present in countless millions of bathrooms around the world. The World Health Organisation defines “improved sanitation” as a system that separates people from their bodily waste without the need for them to come into contact with it. Today, approximately two thirds of the world population meets this criteria, not perfect but a huge achievement that would have been impossible without Cumming's S-bend and Bazalgette's sewer system to set the standard. The flushing toilet has improved quality of life for not only their owners but also neighbours and helped provide a more pleasant living environment for everybody. In an age where toilets can not only be flushed but automatically clean and dry your rear, it's important to remember that none of it would have been possible without Alexander Cumming's simple but world-changing S-bend.

If you'd like to enjoy all the benefits of a modern (flushing) toilet, we offer a huge range of different toilet styles to suit your home! Learn more about Bathroom History with our article on The History of Showers