What Happens to Toilet Waste Onboard Various Forms Of Transport? 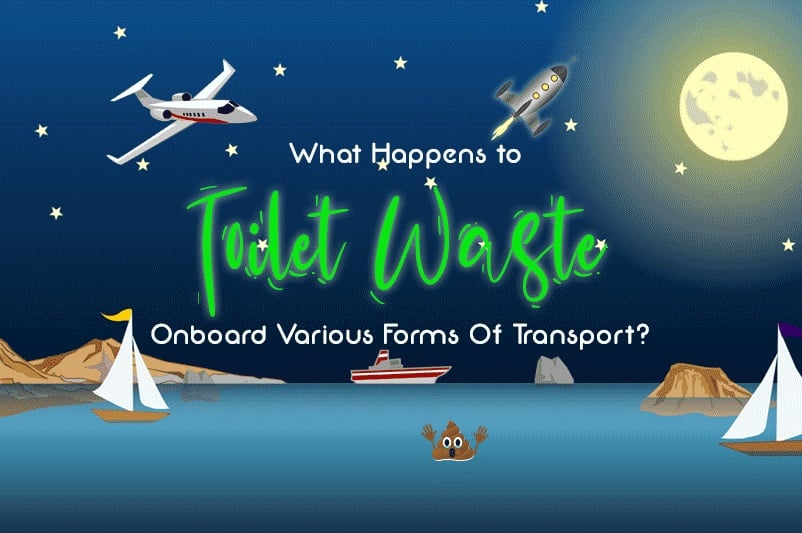 Whether we're zipping through the air to go on holiday or blasting off into space to live onboard the International Space Station, humans all have one thing in common - when you need to go, you need to go! Going to the toilet on various forms of transport was always going to be a tricky problem to solve, and while the methods below aren't always the best, it's definitely better than not being able to go at all. Read on to find out what happens to toilet waste onboard various forms of transport

What happens to poop on aeroplanes?

You've no doubt heard the urban myth that toilet waste is simply dumped from the plane when it's flying through the air. A shred of common sense dictates that this would not only lead to a nightmare of human waste raining from the sky but also that it's not exactly safe and airlines don't want to be responsible for accidentally killing someone with frozen poo. That's not to say that human waste doesn't sometimes fall from the sky.

Blue ice is the name given to a 'mixture of human biowaste and liquid disinfectant that freezes at high altitude' and can sometimes leak from aircraft lavatory waste systems. This has lead to reported incidents of chunks of blue ice smashing through the roofs of buildings. These are usually buildings that sit under airport landing paths as the mass of blue ice warms as the aeroplane descends, leading to it sometimes breaking away. However, there doesn't seem to have been any documented incidents where a person was killed by falling blue ice (However, it has been used in fiction. The tv show Six Feet Under had one episode where a woman was killed by a falling block of blue ice from an aeroplane).

You'll be happy to know that pilots don't even have the option to eject waste from the plane, but we'll get to what happens to the waste in a moment. Toilets onboard planes don't use water to flush like regular toilets do, as having standing water sitting in the bowl isn't a good idea on a plane that ascends, descends and makes steep turns in the air. Instead, flushing the toilet opens up a valve in the sewer line and a strong vacuum sucks out the waste and deposits it into a tank. This vacuum is so strong that it can suck waste in any direction, including upward. It's also why a warning notice always states so you shouldn't flush the toilet when you're sitting down. Although the tall tales about it sucking peoples innards out aren't true.

Once the aeroplane lands, a special service truck approaches the exterior of the plane. A tube is attached to the tank outlet that sucks the waste into the truck, where it is taken away to be disposed of. If the tank isn't emptied before the aeroplane sets off again, it can lead to the tank being at full capacity and a lot of annoyed passengers.

What happens to toilet waste on trains?

While aeroplanes dumping waste onto the ground is an urban myth, trains, on the other hand, are a different story. While modern trains won't litter the tracks with human excrement, the traditional method did just that. This is what was known as a hopper toilet. It could either be a simple hole in the floor (also known as a drop chute toilet) or a full-flush system. This system is still in use in many parts of the world, particularly on older rolling stock.

At the end of 2019, the UK still has trains running on the network that dumps raw sewage onto the tracks, creating environmental health risks and unsanitary conditions for railway workers. Some of this rolling stock won't be phased out of use until the end of 2023. This is why older trains feature notices within toilets that tell you not to use the toilet when the train is stopped at a station or standing at a red signal. In the USA, staff were instructed to lock toilets when the train was stopped in a station and unlock them when the train was again underway.

Mercifully, new trains no longer dump waste on the tracks. Instead, trains are fitted with chemical holding tanks. These are connected to regular toilets or vacuum toilets. Like aeroplanes, these need to be emptied regularly, leading to trains having to return to terminal stations. If the tanks aren't emptied, they can reach full capacity and lead to toilets onboard backing up. If you've ever ridden a train in the UK, you'll know that out of order toilets are a common sight and this may be the reason why.

Finally, some trains in the Netherlands and Switzerland feature composting toilets. These toilets use bacterial action to break down solid and liquid waste. Broken down clean liquid is released onto the track beds after being sterilised, while the solid waste only has to be emptied every half year.

What happens to toilet waste on ships?

In January 2019, an image went viral that purported to show a cruise ship emptying sewage into the ocean. In the image, you can see a large cruise ship with clouds of brown water radiating from it, which descriptions of the image said was human excrement. The reality, it turns out, was somewhat less dirty. According to fact-checker Snopes, quoting Alejandro Nario (Uruguay's National Director of the Environment) the 'image captured the cruise ship's starting up its turbines before dropping anchor, and thus the brown clouds visible in the water are sand and mud churned up from the water's bottom, not clouds of human excrement.'

That's not to say that ships don't dump sewage in the ocean. A report by Friends of the Earth stated that cruise ships alone released over a billion gallons of sewage into the ocean in 2014. While ships are becoming more environmentally friendly, they can still get away with dumping sewage once they're in international waters and many older ships don't have the facilities to treat the sewage before it's dumped. However, this doesn't mean that all waste is dumped.

Toilets on board cruise ships are connected to vacuum suction lines that direct the waste to marine sanitation farms onboard the ship. This siphons out the water from the waste, treats it until it's drinkable, then pumps it into the ocean. Solid waste is broken down by aerobic bacteria in storage tanks, which are emptied ashore about once a month.

As the world becomes increasingly focused on protecting our oceans, more regulations and technology onboard ships will be put in place to ensure that the oceans suffer minimal pollution from the ships zipping across them.

What happens to toilet waste on buses and coaches?

If you've ever been on a long bus or coach trip then you'll usually notice that many of them have onboard toilets. You'll also come to learn that sitting on any seat that's close to the loo is one mistake that you won't be making again. These cramped little spaces barely give you enough room to move, and usually direct men to pee sitting down to avoid any nasty accidents. Essentially, you'd probably prefer to wait until the next rest stop than use one of these tiny toilets.

There are two main types of toilets on buses and coaches. The first is a toilet with a flap. This design has a handle for flushing, whereupon blue formaldehyde fluid washes away the waste away through an opening flap that leads into a holding tank. A toilet without a flap doesn't need to be flushed and waste instead drops straight into the holding tank.

The holding tank is normally emptied at the end of every trip to ensure odours don't become overwhelming. A sewer pipe is attached to a fitting on the outside of the bus and the other side is connected directly to the sewer, emptying the waste into the local sewer network. However, this does not seem to be the case in the UK, where a coach firm was fined for breaking environmental law by emptying toilets into the sewer instead of taking it to an approved disposal site.

What happens to toilet waste in space?

We could write an entire article on the history of people needing to poo in space, and we may well do so in the future, but in the interests of brevity, we'll stick to talking about how current toilets work in space. The toilet on board the International Space Station is based on the Waste Collection System that was used by the Space Shuttle.

The shuttle toilet used a design similar to what we see here on Earth, but it works similarly to aeroplane toilets in that it doesn't use water to flush away waste. Instead, fast-flowing air and rotating fans are used in conjunction with a 'slinger' that collects waste and propels it to the side of the bowl. The fans separate liquid and solids, dumping the liquid into space. Solids are then dried using vacuum and stored onboard the shuttle for emptying once the Shuttle lands on Earth. It wasn't an infallible system, suffering from issues on its maiden voyage which led to NASA having to return it to the contractor for improvements. Astronauts also had to be trained to use the toilet, as they still do today with the ISS version of the toilet, although it may be a little more complicated than the potty training you did as a child (but it could be just as messy!).

As already mentioned, astronauts have to learn how to use the space toilet before they set off on a mission. Training covers methods like learning how to position themselves correctly to use the smaller than usual hole, as well as learning how to put on the leg restraints to hold themselves in place in the microgravity of space. Currently, the ISS features two toilets. One is located in the Russian Zvezda module while the other sits in the NASA/ESA Tranquillity module. They're very similar to the WCS design used by the old Shuttles, but the design has been improved for long-term use.

Male astronauts position themselves a few inches away from a funnel that they then relieve themselves into, while female astronauts use an oval-shaped funnel that's placed against the user and features small air gaps around the rim to reduce suction. All waste is then sucked away down a vacuum tube using a fan. The waste then enters the vacuum chamber, which is a cylinder in which waste collection bags can be clipped to. Urine is directed to waste storage drawers, which is collected so it can be filtered by a filtration system to turn it back into drinking water. Solid waste is stored in a detachable bag, filled using a fan inside the vacuum chamber. The fabric of the bag allows gas to escape to prevent a build-up. The bag is then sealed and stored in a waste storage drawer. Eventually, full containers will be moved to the Progress module and fired into space with other rubbish from the ISS. It then neatly burns up in the Earths atmosphere.

Scientists will continue to improve and refine the designs for going to the loo in space, especially as lengthier and more dangerous trips to the likes of Mars become a reality, but it's always going to be far more complex than just sitting down on the loo at home.

For more information on space toilets, watch this interesting video of ESA astronaut Samantha Cristoforetti giving a tour of the International Space Station Toilet. For more fun content why not check out our Choosing a Toilet for a Narrowboat