What Happens when I Flush the Toilet? 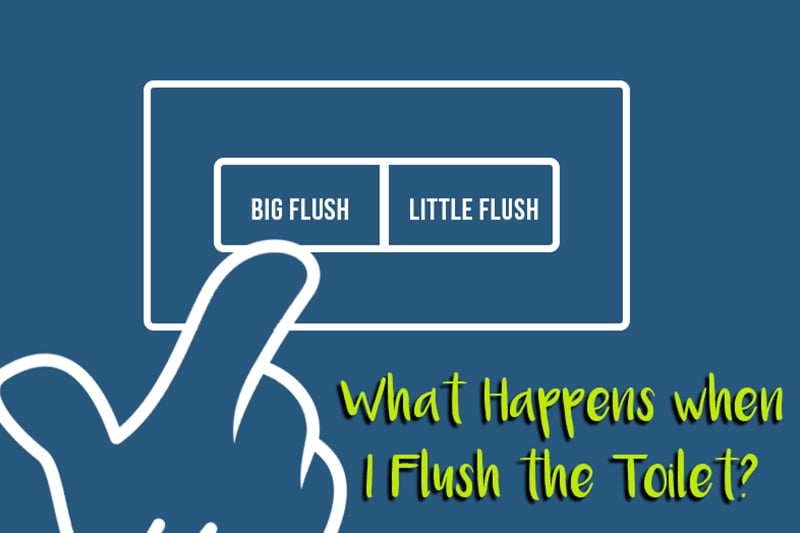 What happens when I flush the toilet?

We all flush the toilet many times a day but it's not something we give too much thought to - for obvious reasons! However, there are many systems and processes that begin every time you visit the bathroom. So exactly what does happen to the water when you pull the plug out of the bath or flush the toilet, where does it go next and is it true that a glass of tap water in London has been through nine other people?

The drains in each house flow into a central main sewer pipe, which general runs through the middle of the street. These channels are fairly narrow and this is where blockages are most common - usually because we've flushed things down the toilet which should not be there. Common culprits are nappies, baby wipes, sanitary products and cotton buds. Fat can also cause problems as when it is washed off plates and down the sink it congeals at a later date and can form huge “fatbergs” which can completely block sewers. Make life easier for everyone by never flushing anything other than loo roll down the toilet. These sewers then in turn flow into larger sewers which run to the first part of the waste treatment plant.

Once the waste water arrives at the waste treatment centre, the first part of the process is to screen it and remove any of those nappies and baby wipes which have been flushed down the loo. Grit and other debris is removed during this part of the process too. The screening doesn't remove the human waste from the water though, so this is the dirtiest and smelliest part of the whole process. The large items, once removed, are cleaned and sent to landfill.

Now that only the necessary waste remains, the water then goes through the primary treatment process. Water is put into large settlement tanks where it is left to stand until any solids have dropped to the bottom of the tank and formed a thick sludge or risen to the top to form a scummy layer. Large bridge type structures then travel along the tanks as two blades collect the waste from the top and bottom. In many places, the sludge is further processed to generate renewable energy. At a Thames Water processing plant for example, the sludge generates enough renewable gas to fuel 200 homes.

After all of the solids have been taken out of the water, it might look considerably cleaner but it is still far from safe to drink. The next stage of the process (biological treatment) deals with any bugs and other dirt which might be present in the water. Dirty water is put into large tanks, and air is pumped through the water. This process encourages the “good” bacteria to grow in the water and kills off the bacteria which could do us harm. The treated water is then put into a third tank where the good bacteria sink to the bottom and again form a thick sludge which is recycled back into the secondary treatment stage. The water is by now almost clean, and just needs a final filter through sand before it is returned to the river or into the sea.

Here in the UK we have some of the strictest standards in the world about the quality of water which is returned to streams or rivers. Once the water has gone back into the rivers, it may well again end up in the drinking water system again and maybe used to flush the toilet again. When you think that on average we use 150 litres of water every day for washing, laundry and drinking, that's a lot of water which has to be processed every day of the year. Make life easier on the water treatment workers by thinking carefully about what you're flushing away, invest in an eco toilet cistern perhaps, and try only to use the necessary amount of water.