Which Type of Boiler is Best For You 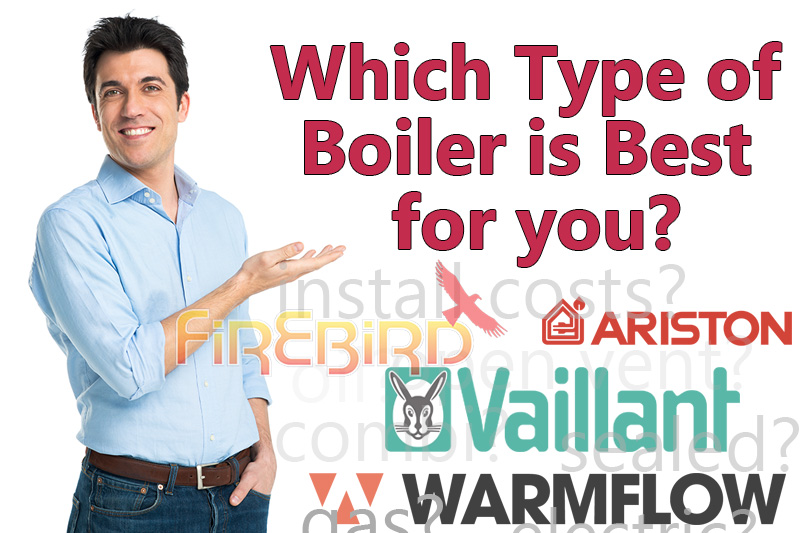 Which Type of Boiler is Best For You

Choosing the right boiler can be difficult and long winded. You have to take into consideration the space you have available, how much water you are likely to use, how economic your boiler will be and possibly most importantly, the cost.
It is now the law that all new boilers must be high-efficiency, condensing boilers unless it is too expensive or difficult to fit one. Condensing boilers recycle the heat that is usually lost by normal boilers; an A-rated boiler will be more than 90% energy efficient. There are many different types of boiler to choose from and this can be difficult if you do not understand boilers. Here is a brief overview of the different types of boilers and the benefits of each of them.

Combination boilers have quickly become the best selling boiler in the UK; they are small and very economical. They also directly heat the water giving an endless stream of hot water. Combi boilers do not have an external water tank so there is no need for reheating the water. However because of the lack of a hot water storage tank, if another tap is turned on whilst the shower is being used it will interrupt the flow of hot water.

Is a combination boiler the right choice?

Combi boilers are brilliant in small houses or flats, without multiple bathrooms. They are also very good if you have limited space. Changing an old boiler for a combination boiler will free up more space as there is no need for a water storage tank. A combination tank is also the only boiler that will give you constant, instant hot water.

A system boiler works on the principle of stored hot water. Meaning that you will need to have enough space to fit a tank in the airing cupboard. However because most of the components are built in it makes a system boiler quicker, easier and more efficient to install. A system boiler allows hot water to be run from more than one outlet without another being affected; they also have good water pressure.

Is a sealed system boiler the right choice?

A system boiler is great for a larger space or somewhere that has many water outlets. A high hot water demand that cannot be met by a combi boiler makes the system boiler ideal as it doesn't take up too much space, however, it does need a tank in the airing cupboard. However, unlike the combi boiler, a system boiler can run out of hot water if it is used very quickly.

An open vent boiler is a system that exists in most homes. This type of boiler system consists of two water tanks, both of which are located in the loft and a hot water storage tank in the airing cupboard, so it will take a lot of space. The first tank takes water from the mains supply and when heated by the boiler and this can release hot water to all the taps in the house. The second tank contains the correct level of water for the heating system. Water can be drawn to any room but if the hot water supply runs out then it will take some time to reheat. Switching from an open vent boiler to an open vent sealed boiler is relatively easy and cheap and will rid the need of one of the tanks in the loft.

Due to the fact that this system exists in many houses, it makes an open vented boiler quite inexpensive to replace. However, both systems use up quite a bit of loft space. Open vent boiler systems allow hot water to be run from a range of outlets without the water running cold from other taps. The water pressure will be low and drinkable water will only be accessible from one outlet, there is also the possibility that the hot water will run out meaning it will take a short time to reheat.

Back boilers are still fitted in some homes, hidden behind the chimney, usually with a gas fire in front of them. This is probably the least popular choice for a new boiler as it takes up a lot of space and it needs to be hidden, the water pressure is also quite low. Back boilers are traditionally not very efficient but have developed a huge amount over the last 5 years, so replacing your back boiler could save you a huge amount of money on your annual heating bills.

Is a back boiler the right choice?

Back boilers provide consistent hot water and heating they make it possible to have hot water from more than one tap at a time without affecting other outlets. However, they do take up a lot of space in the home, the boiler behind the chimney, two water tanks in the loft and a tank in the airing cupboard. Not many people even consider having a back boiler fitted as a new boiler, but as a replacement for a similar back boiler, it is probably the cheapest option.

How much will it cost to install a new boiler?

The price will vary depending on what type of boiler is being installed and whether it is a complete change or just a newer version. It will cost around £700-£1000 for a good gas or oil boiler, an oil boiler will cost slightly more. However, if you're having a central heating system fitted with radiators and heating controls this will cost considerably more. If the costs seem like a lot or you think you might struggle to pay for a new boiler then there are certain grants and benefits that many people are eligible for to help pay for this.