Since radiators were first introduced to homes, people have been turning to them as a means to dry their clothes, towels and other linens. On the surface, it makes a lot of sense; in the winter months when you don't have many chances to peg your washing outside, you radiators will likely be active and they offer a warm, obvious drying spot. Even if you do own a tumble dryer, some of your more delicate clothes probably aren't suitable for tumble drying. In spite of this, though radiators seemingly offer a great place to dry your washing, there are a number of reasons you should think about hanging wet clothes elsewhere.

Aside from any other issues, draping wet clothes or towels over a radiator insulates heat and prevents it from circulating properly. This will affect any heaters but certain types, such as convector radiators, function by creating hot air currents and will be far less effective when covered by wet material. In addition, leaving clothes on storage or convector heaters can pose a serious fire hazard.

In recent years, scientists have warned against the potentially severe health consequences of placing clothes directly onto a radiator. By heating the moisture of wet clothes, aspergillus fungal spores can form and enter the air. For most of the population, aspergillus spores won't be a problem as many people are immune to them or have healthy immune systems that negate their effects. However, there are an unfortunately large number of people who are potentially vulnerable to negative health effects, such as those with lung conditions including asthma or with a weakened immune system due to other health issues.

For those vulnerable to its effects, in rare cases these fungal spores can cause pulmonary aspergillosis, a condition that can potentially do severe damage to the lungs and even become fatal if not remedied quickly. Aspergillosis actually refers to a number of different conditions that affect the lungs, sinuses and windpipe, each of which are caused by aspergillus spores. How serious a problem these conditions might become varies depending on a person's age, existing health issues and how many spores they've inhaled.

Despite this, occasionally drying clothes indoors is probably unavoidable, especially if you don't have access to a tumble dryer. There isn't any real danger in drying the occasional item such as a pair of wet socks after getting caught in the rain but it's a bad idea to cover each radiator in your home with your entire basket of washing. At best, you'll badly restrict the the amount of heat your radiators can provide to the rest of your room but at worst you'll be adding a significant amount of moisture and potentially dangerous spores to the air.

If you do need to dry a few items on your radiators, it's worth opening a window in the room to give water vapour a chance to escape. You don't necessarily need to open them far; most modern windows will have a vent or a way of being held open only slightly to allow moisture to escape. It's also a good idea to close the interior doors to the room where you're drying items, to prevent moisture from spreading to other areas of your property. If moisture is allowed to build up inside your property, it might cause condensation that can result in damp and mould, possibly causing long lasting damage to your home, with plaster, wallpaper or other features being increasingly affected. However inconvenient it might be to travel to your nearest tumble dryer, it's bound to be less expensive than redecorating an entire room.

Ironically, improvements in home insulation mean that moisture is now likelier to be trapped in your home. These improvements include double glazing, draught proofing and better insulation. While this is great for trapping heat, it can also mean a lack of ventilation and result in moisture being unable to escape. Years ago, when open fires were more popular, they would provide a great deal of heat while the chimney also served as a way to ventilate moisture but they have become less common as society moves away from fossil fuels. As there shouldn't be much moisture floating around your home, this usually won't be a problem but it's another reason not to introduce more vapour by covering your radiators with wet clothes.

You could combat this problem by placing a humidifier in the room where you're drying your clothes but, again, this is a very costly solution to a problem that would be negated by simply visiting a local laundry service or hanging your clothes on a clothes horse. If you do need to dry clothes indoors, it's always best to do it in a room with an extractor fan, such as a bathroom or kitchen, in order to minimise the amount of humidity. Just because you shouldn't place clothes on radiators to dry them, it doesn't mean you can't take advantage of the heat they provide. Products such as radiator airers can be attached to your radiator, providing a place to hang your washing while it dries without covering the heat source itself.

If you do need to hang your clothes somewhere warm in order to dry them, the best option is usually a heated towel rail. Unlike radiators, these are designed to have towels and other damp items hanging from them and can cope with the extra workload of drying items while also keeping your bathroom warm. Aside from anything else, bathrooms are usually far better equipped to deal with the extra water vapour, thanks to extractor fans and tiles or other waterproof surfaces. If you're only looking to dry a few items at a time, using a towel rail is less expensive than a tumble dryer and allows you to hang several items at once, unlike most radiators. Heated towel rails are usually installed in bathrooms but they're also ideal for utility rooms or wherever else you clean your laundry, giving you an extra place to hang and dry your washing. Just make sure that these rooms are properly ventilated with windows or extractor fans. Some modern rails even feature convenient shelves where you can place folded towels, keeping them warm and ready to be used. You can even place a clothes horse next to your rail if you want to get some extra drying done. 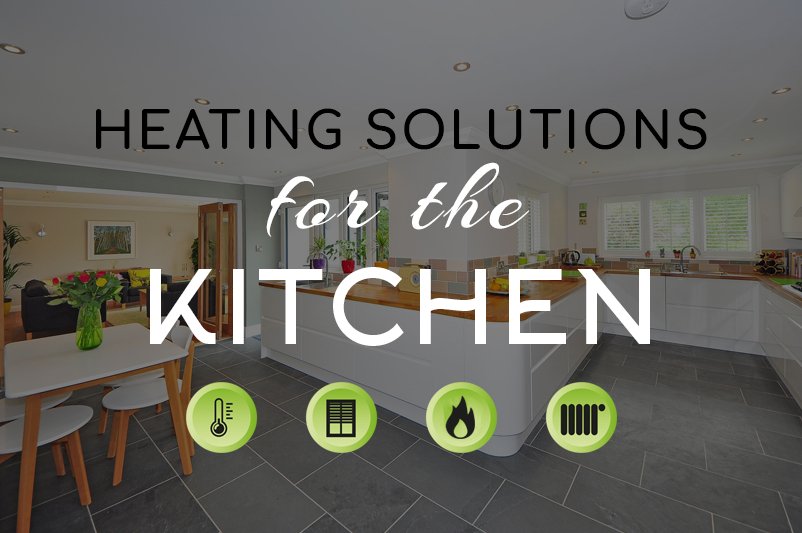 Heating Solutions for the Kitchen