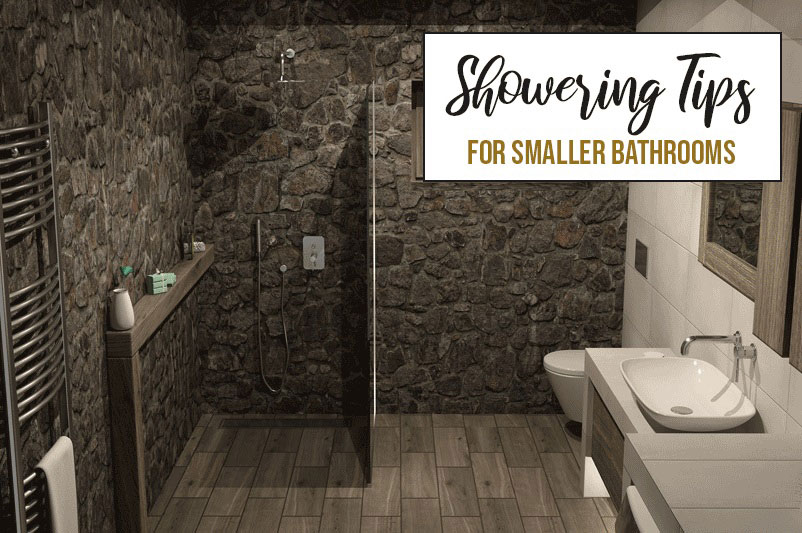 At some point in all our lives, we've likely endured the discomfort of using a small shower enclosure. Whether it's constantly bashing your elbows into the sides of the cramped cabin, bashing your head on a shower basket as you're rinsing your hair or simply struggling to enter and exit through the door, an inadequate shower enclosure can be a real inconvenience. If you're working with limited space in your home, you might feel as though you have no choice but to put up with your cramped morning showers but there may be some alternatives to make your daily routine more enjoyable. To help you make the most of your space, we've collected these showering tips for smaller bathrooms.

Perhaps the most important decision you'll make when choosing your shower enclosure is deciding on a tray shape. Your shower tray is one of the foundations of your bathroom and will determine the profile of your entire enclosure. If you're working in a small space, you'll most likely want to place your shower in a corner, to avoid it imposing too much on the rest of the room. The majority of modern shower trays are designed to be suitable for this purpose, with at least one 90 degree angle that is intended for corner placement. This applies to square and rectangular trays, as well as spacious pentagonal trays. In a small bathroom, however, you'll probably want to choose a quadrant tray.

Quadrant trays have two straight sides designed to sit flush against your walls, and one curved side; essentially, a quarter of a circle or semicircle, depending on its dimensions. These trays are designed to occupy the smallest area possible, while also providing plenty of room to move around while using the shower. There are countless quadrant trays available, with both left and right handed versions to ensure you can find your perfect size and shape. Selecting a tray and enclosure that make the most of your bathroom floor is one of the most important aspects of maximising your space.

If you feel as though incorporating a shower enclosure into your room is going to make it feel too cramped, you could consider doing away with a traditional tray. This will probably take one of two forms: installing a flush to floor shower tray and accompanying screen or converting your bathroom into a wet room, removing the need for a tray entirely. Of these, a tray and screen is a less expensive, less time consuming option that a can still result in a relatively seamless experience while using the shower. On the other hand, converting your bathroom into a wet room means you can install your shower without having to worry about an enclosure, as the entire room is waterproofed and floor space concerns can cease to be an issue. Alternatively, tiling the floor of your shower area and installing a single panel shower screen retains a sense of openness in your bathroom while also protecting the rest of the room from splashes of water.

One of the major obstacles to installing a shower enclosure in a small room is the question of heating. The larger your radiators are, the less space you have for your enclosure. On the other hand, if you remove your radiators then you'll have to face the prospect of stepping out from a shower into a freezing cold winter bathroom, which nobody enjoys. A heated towel rail is a sensible option for any bathroom, keeping your room warm and drying towels safely without releasing any potentially dangerous vapour into the air. Another possibility and one that is obviously a far more significant process is installing underfloor heating in your bathroom. This is likely to be costly and messy but has the benefit of not occupying any of your wall space (if you're working in a small bathroom, the one positive is that you won't need many underfloor heating panels to heat the room properly). In a cramped bathroom, underfloor heating is the ultimate space saving heating solution and means that you'll enjoy an extra metre of two of wall space compared to using a traditional radiator or heated towel rail.

This is more of a design tip than true advice on saving space but it's a good idea to have uniform tiling throughout a smaller bathroom. This can be a simple case of tiling your shower area and other walls in the same style or also tiling your floor in the same manner. By placing uniform tiles throughout your bathroom, you eliminate some of the lines that can otherwise divide up your bathroom and create a visual sense of it feeling smaller. This isn't to say that you can't still create interesting patterns and unique tiling choices, just that it's best to use a single tiling scheme around the entire room for continuity. This only really applies if you're using neutral colours such as white or cream; brighter colours such as orange can become slightly oppressive if they're on every surface. Larger tiles can further enhance the effect, reducing the number of lines on your walls.

If you're working in a limited space, it's important to keep things simple. Each piece of furniture or decoration you add to your bathroom reduces the amount of space you have for your ceramics and move freely between them. The same philosophy applies to your ceramics and shower area themselves; with the range of lavish shower enclosures available today, it can be tempting to cram a large cabin into your room. It's important to keep in mind that bathroom design isn't merely a matter of how much you can fit into a particular area; it's also important to be able to move around and enjoy a sense of space and freedom while using your room. When measuring your bathroom and choosing which items you want to install, try to imagine how the room will look after it's completed (alternatively, there are a number of different 3D home designer software online). Once your shower and ceramics are installed, you might find you still have some extra space for an accessory or two.

If your shower enclosure is quite small, it can be a good idea to add a mirrored wall or two, essentially doubling how large it appears from the inside. A mirror in the shower can be quite useful, helping you keep shampoo and other products away from your eyes and allowing you to perform your hygiene or beauty routine more easily. Some shower cabins already include a mirrored surface but it should be a simple process to add one, especially if your walls are smooth. Mirrored adhesive film is relatively inexpensive and can greatly increase your space in the shower, for the sake of about ten minutes' work. A mirrored surface can also reflect light and help brighten your enclosure, especially helpful in rooms that are otherwise a bit gloomy. 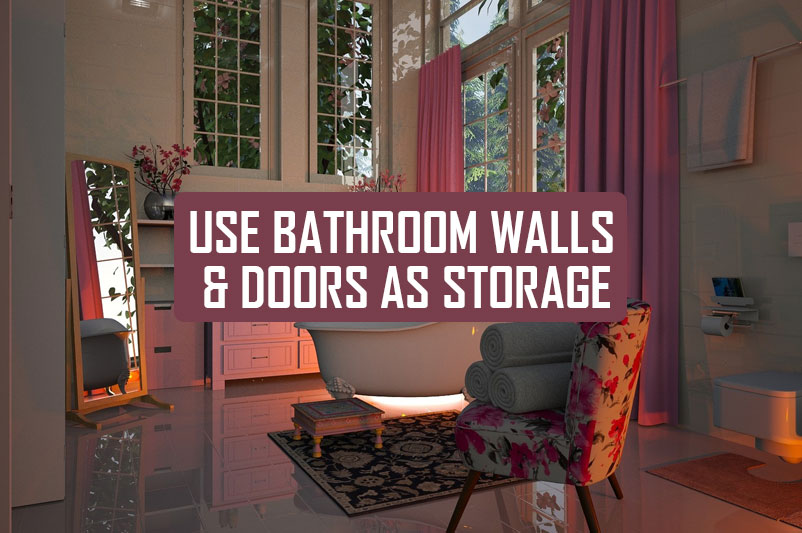 Use Bathroom Walls and Doors as Storage 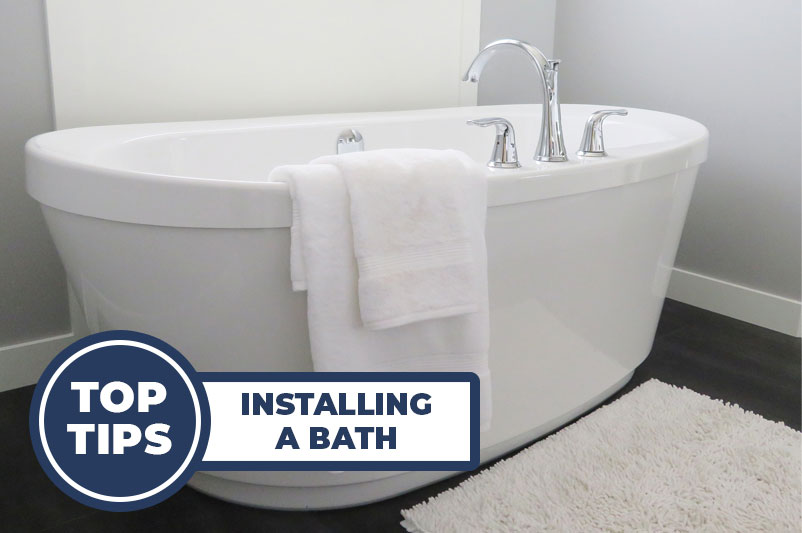 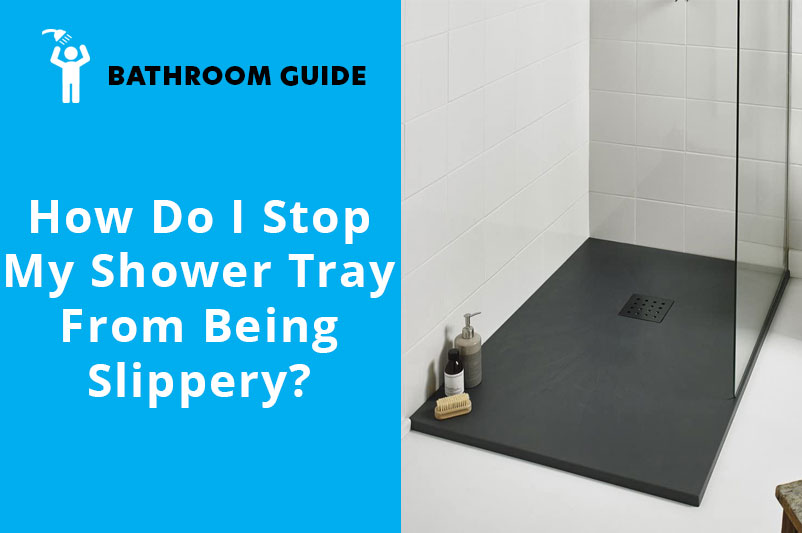 How Do I Stop My Shower Tray From Being Slippery?