What is a Condensing Boiler? 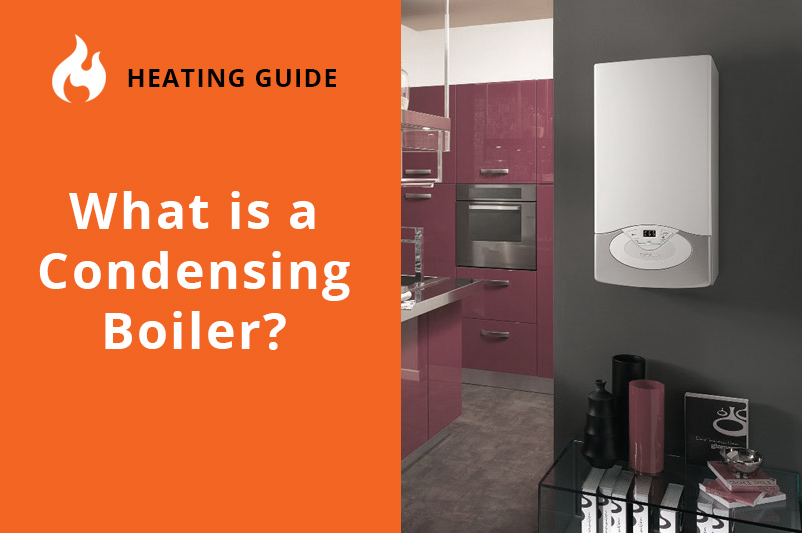 What is a Condensing Boiler?

Condensing boilers are some of the most efficient available, creating the most heat energy possible from your fuel source and reducing costs. Replacing your old boiler with a condensing boiler has been found to save homeowners hundreds of pounds per year. For many customers, though, the question remains of exactly what is a condensing boiler? Condensing boilers function in largely the same way as your existing boiler, burning fuels such as oil or natural gas, but they differ in the way they make use of the resulting heat energy. These boilers have a number of benefits but they aren't an ideal fit for every home and every customer, so it's important to take some time to examine the positives and negatives before buying.

On the whole, condensing boilers function in a similar method to traditional boilers. A burner is supplied with fuel, producing a flame, which then warms fluid in your central heating system as it passes through a heat exchanger. In traditional, non-condensing boilers, this process produces a significant amount of water vapour that is vented away from the system, resulting in wasted heat energy. Condensing boilers increase their efficiency by taking this steam, produced when the hydrogen content of fuel is burned, and condensing it into liquid form, putting the residual heat to good use. As a result, less heat energy is required from your burner and the boiler's fuel demands are reduced. This can typically improve boiler efficiency by as much as 12%. How effective this process is depends on the temperature of the water vapour but in the majority of cases it will result in more efficient heating.

It's also important to ensure your heating system and boiler are installed properly; incorrect settings can result in a lack of condensation in the boiler, losing the major benefits of a condensing unit. The lower the temperature of water when it enters the boiler, the more likely it is to cause condensation when heated. Ideally, returning water should be less than 55°C by the time it enters the unit. As a result, even older, lower temperature heating units such as cast iron radiators can be a great match for a new condensing boiler.

In the early years of condensing boilers, it was commonly believed that they were less reliable than conventional models. One of the most noticeable issues early on was that of “pluming”, a visible white plume of condensation from the outlet flue. Although this was unrelated to any sort of mechanical fault, a common perception was that this was the result of a problem with the boiler. Lack of familiarity for engineers and plumbers was also an issue in the early years, as condensing boilers have a number of unique features. This led to instances where mechanical failures would occur because of incorrect installation, rather than boiler faults. As a result, they have carried this reputation into the present day, unfairly for the most part.

At the same time, there are some genuine issues with condensing boilers. The most significant of these is that the liquid produced in the condensing process is slightly acidic (between pH3 and pH4), which can increase the rate of corrosion in the boiler's heat exchanger. This is also a result of older boilers using thicker exchangers, which were slower to heat but more resistant. While this vapour can be corrosive, it poses no danger to people or pets. As a result of this acidity, condensing boilers only utilise certain materials in their manufacturing: steel and aluminium are commonly used, whereas traditionally common materials such as copper and cast iron are not suitable. It can be beneficial to monitor your heat transfer fluid; anti-corrosion agents can be used to maintain a slightly alkaline fluid between pH8 and pH9. It is believed that this will reduce the rate of corrosion. It is difficult to predict the lifespan of a condensing boiler with certainty, given how recent the technology is. However, most manufacturers offer a warranty of around five years on condensing boilers and sometimes longer on the heat exchanger unit, particularly if they're made of stainless steel.

Since their introduction, several countries have made their use compulsory or offered financial incentives for installing them. In the UK, it has been compulsory since 2005 that all new gas boiler installations must be modern, high-efficiency condensing boilers. While there is more leeway with new oil boilers (particularly warm air central heating systems) the use of condensing boilers is still encouraged and their rapid spread around the world has shown no signs of slowing down.

The Cost of Condensing Boilers

Condensing boilers are currently more expensive than conventional boilers, often costing as much as 50% more than their older counterparts. However, the Building Research Establishment (BRE) have claimed that this increased cost should be negated in between two and five years of installation thanks to reduced fuel use. How significant the difference in your fuel usage is will vary depending on how often your new boiler is used, the age and efficiency of your original unit and the difficulty of installing your replacement. As governments embrace the environmental benefits of condensing technology and manufacturers abandon conventional boilers, costs are gradually being reduced.

Servicing should be no more expensive and time consuming than with traditional boilers. The Building Research Establishment has conducted extensive research into condensing boilers and found that, on the whole, they do not require servicing any more often than traditional boilers and are just as reliable. The only additional task is to ensure the condensate drain is functioning properly. The BRE also stated in their findings that condensing boilers were, at the very least, consistently more efficient and had reduced fuel demands in comparison to their traditional counterparts.